Start a Wiki
Alfred "Alf" James Stewart (later cited incorrectly as Alfred Douglas Stewart) [1] is a character from Home and Away played by Australian veteran actor Ray Meagher , who has been a staple of local television and film for over 50 years, he is seen as the series patriarch figure in the fictional Summer Bay, that was founded by his Scottish-born great-grandfather Angus Stewart, he has appeared since the pilot episode, alongside his wife Ailsa (who was killed off in 2000), whom was played by Judy Nunn, he has resided in i the small seaside town all his life and has been involved in many of the series major story arcs and storylines since the show began. His numerous iconic catchphrases have entered the popular vernacular and have come to affectionally be known as "Alfism's", including "strewth", "Flaming galah", "strike me roan", "stone the crows" and "Hogan's ghost", such phrases that had previously been in decline in Australia. Alf is the Godfather of Summer Bay, and tries to keep law and order in his manor, the manor his ancestors founded. Alf married Ailsa Hogan in 1988, after his first wife Martha faked her own death in 1985, and is the father of Duncan and Roo Stewart. Alf is played by Ray Meagher, who holds the Guinness World Record record for the longest running continuous character in an Australian soap opera, in their publication in 2002, along with co-stars Kate Ritchie And Norman Coburn, and is currently the only one of the three still with the series, racking up 31 years as of 2019. H&A started production in July 1987, 6 months before first air-date. Alf is the longest serving continuous Australian soap character ever, (ahead of co-star Lynne McGranger who plays Irene Roberts and Neighbours' Alan Fletcher [2], best known to viewers as Dr. Karl Kennedy [3]) Also as he is older, he seems to bear a resemblance to hardman Phil Mitchell [4] of British series EastEnders [5].

1945-1987 Alfred James Stewart (later also incorrectly stated as Alfred Douglas) was born on the 8th July 1945 in Summer Bay to Gordon and Sarah Jane Stewart (nee Townsend). Alf's father was a 2nd generation Scottish Australian. Alf was one of five children born to the couple, Morag was born in 1941, Barbara in about 1946, Debra in about 1947, and Celia in about 1951. Gordon also had a daughter, Colleen from an affair he had with Mavis Hickie in 1939, although his children did not find out until 2008. Alf graduated from Summer Bay High School in 1958 revised to 1963. Alf grew up in Summer Bay and had a romance with Viv Standish in about 1963. They became engaged but Viv soon left him, although she was pregnant with their child. In 1964, Viv had a son called Owen who was adopted by the Dalby family. Alf soon met local woman Martha Baldivis and they married in 1969. They moved into Summer Bay House. Alf was in service in Vietnam during the late 1960s and was scarred emotionally by his experiences. Alf and Martha had a daughter, Ruth, known as Roo, born in 1970. In 1985 Martha faked her death in a boating accident. Roo was 15 at the time. Alf always remained proud of his Scottish ancestry.

Alf ran the Summer Bay Bait Shop in 1988 and was dating Ailsa Hogan. Alf's daughter Roo was jealous of Ailsa and even hired her aunty Morag Bellingham to do a check on Ailsa's past as Roo felt Ailsa had a dark secret. Alf later sent Roo to boarding school when he discovered Roo had been blackmailing Ailsa. Alf then married Ailsa in May 1988 (Episode 86). During a row in August 1988, Alf said he had better watch himself or he may get a knife between the shoulder blades, referring to when she killed her father. This infuriated Ailsa. She left him and went to stay in the city with her ex-boyfriend Graham Lynch. Alf later begged Ailsa to return home and she got the next flight back from Singapore, where she was at the time.

In January 2001 (Episode 2961), Alf said goodbye to his wife Ailsa and her ashes were scattered at sea.

Since 2011, Alf has had quite a quiet life and took in Maddy Osborne. He currently lives with daughter Roo, grandson Ryder Jackson and friend Leah Patterson-Baker at Summer Bay House. In April 2015, Alf commemorated the 100th anniversary of Anzac Day. He then suffered from PTSD due to being a former Vietnam War vet.

Full Name: Alfred James Stewart (more recently his full name in a continuity error has been given as Alfred Douglas Stewart) His second wife's name was Ailsa, but he always called her "Ails" for short, some misinterpreted her name as Alice.

How old is Alf Stewart? Well don't flamin ask. But throughout the series there have been numerous references to Alf's age and stone the crows none of them seem to tally up. He is sort of the unofficial Duke of Summer Bay, royalty, so maybe he has 2 birthdays. (Note: see also article Character Birthdays)

In Ep 571, Alf's full name is said to be Alfred James Stewart but later episodes say his middle name was Douglas.

Alf's great grandfather on his paternal grandfather's side was Scottish and Alf has mentioned a few times about his ancestor who was a proud Scotsman, and how he discovered Summer Bay. Alf has even talked of visiting Scotland in 2010 to explore the Clan Stewart.

"You are going to feel the leather of my belt" to troublesome son Duncan in 2001.

"Say that again you will get a clip round the ear you flamin galah" To anyone who crosses him.

"I better watch myself around you Ailsa in case I get a knife through the shoulder blades" after Ailsa hit Roo and knowing she killed her father years ago in self defence.

Alf is the first man to give any cheeky youngster a clip round the ear for being mouthy. His bark tends to be worse than his bite, despite calling most people "galahs" and the fact he does not suffer fools gladly, and can be handy with his fists, Alf is generally a nice guy.

Former Neighbours actor Ian Smith (Neighbours' "Harold Bishop") did an impression of Alf in an interview for Channel 10 News in 2018. The presenters suggested Ian lands a role in H&A. Ian smiled at the idea but did not seem keen.

Alf has also been compared many times to 1980s Neighbours character Max Ramsay. Max had a fiery nature and a temper, he was more fiery than Alf. But both had much in common, not just their tempers but their sense of humour and their voices even sound similar. Viewers even imagined a Neighbours/H&A crossover where Alf fights with Max. Sadly the Max Ramsay actor Francis Bell died in 1994.

Alf is hailed as one of not just H&A, but soap opera's most iconic characters. 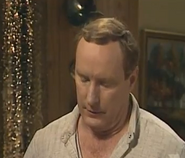 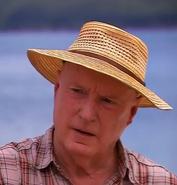 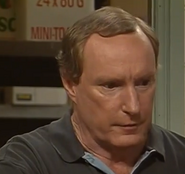 Alf sipping a can of beer. 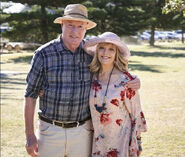 Retrieved from "https://home-and-away-soap-opera.fandom.com/wiki/Alf_Stewart?oldid=35494"
Community content is available under CC-BY-SA unless otherwise noted.