Home And Away Soap Opera Wiki
Register
Don't have an account?
Sign In
Advertisement
in: Home And Away characters, Past characters., Characters first seen in 1989.,
and 11 more

Emma Jackson was a main character from September 1989 (Episode 400) to August 1990 (Episode 608). She was the wayward niece of Ailsa Stewart and was played by Dannii Minogue.

Emma Jackson was born in 1972 to Bridget O'Rourke, who was one of Ailsa's sisters. Emma's father died in 1980 when she was 8 years old. Bridget later married Barry Jackson who was abusive towards Emma.

Emma turned up unexpectedly at the Stewart house in September 1989. She had got herself into hot water at home after defending herself against her nasty stepfather. Emma enrolled in Summer Bay High School and wasted no time in causing a stir. She formed a student rebellion against the school uniform, leading to her and her classmates turning up for school dressed as punks. They were trolled by their principal Donald Fisher who turned up for class himself, also dressed as a punk. His point was that by rebelling and dressing up as punks, his students had simply traded one uniform for another.

Outside of school, Emma worked at The Bayside Diner. She was a lazy employee which didn't endear her to Bobby Simpson. She went out on a date with Adam Cameron but felt uncomfortable when he made a pass at her. When Adam told her he had only gone out with her for a bet, she drilled holes in his raft. Emma became friends with Carly Morris.

In May 1990, Emma's mother Bridget turned up unexpectedly and convinced Emma to move away. Her motives were less than genuine and she was only using Emma to win her ex Barry back. Emma returned to Summer Bay. She left again in September 1990 to become an air hostess and hasn't been seen since.

Dannii Minogue has said, more than once, that she is open to returning to Home and Away. Could it be that we haven't seen the last of Emma?

Last Line: "I would've run away a week after I got here if it wasn't for you guys. Living on the streets again. I'll start bawling soon, Ailsa."

It seems that Emma's mother, Bridget was married at the time she gave birth to Emma. It is unclear as to when Bridged married Barry Jackson. 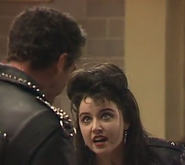 Emma dresses as a punk in class, so does her headmaster Donald Fisher, who berates her for it.

Don in punk clothing trying to show Emma up in class.
Community content is available under CC-BY-SA unless otherwise noted.
Advertisement