Home And Away Soap Opera Wiki
Register
Don't have an account?
Sign In
Advertisement
in: Home And Away characters, Past characters., Characters first seen in 1988,
and 24 more

Phillipa "Pippa" Routledge (previously Ross and Fletcher, née King) [1]OAM was a regular character from January 1988 (Pilot Episode) until March 1998 (Episode 2343). She made later guest appearances in 2000 and 2002-2009. Her last appearance was in April 2009. Pippa, also known as Pip, first appeared in the pilot episode. During her time on Home and Away she was married three times and widowed twice. She was also foster mum to many of Summer Bay's young residents.

Pippa was played by Vanessa Downing from 1988-1990, then by Debra Lawrance from 1990-2009. The recasting of Pippa has become iconic because neither Vanessa nor Debra resemble each other in any way.

Pippa King was born in 30 September 1950 in Sydney, the youngest child of Bert and Coral King. Pippa had a brother called Danny who was 4 years older than her. Danny was a former champion cricketer but was left wheelchair-bound after sustaining injuries during the Vietnam War. Pippa met her first husband Tom Fletcher through Danny because they were best friends. Although Pippa thought Tom would never see her as anything other than Danny's kid sister, they fell in love and married in 1969. Pippa trained as a nurse but by the time Home and Away began, she was no longer working as one. She was advised not to have children of her own for medical reasons. Because of this, she and Tom decided to foster children instead. Their first foster child was Frank Morgan and over time they added to the family.

In January 1988 Tom was made redundant and had no luck finding a new job. Under threat of having their foster family split up, the Fletchers decided to sell up and move to Summer Bay. And so, Frank, Sally Keating, Steven Matheson, Lynn Davenport and Carly Morris moved to Summer Bay with Tom and Pippa. The Fletchers bought the Caravan Park and moved into Summer Bay House. Tom and Pippa went on to foster local tearaway Bobby Simpson and her adoptive sister Sophie. Bryan Forbes (Dodge) was a rare failure but then it's not every day someone is given a soon-to-be convicted murderer to foster.

Pippa became pregnant in early 1988 and despite the risks, decided to go ahead with the pregnancy. She gave birth to a son called Christopher in August 1988 (Episode 156). Pippa and Tom had a long and happy marriage, though it did have its ups and downs. In 1989 Tom suffered a stroke which hospitalised him for a time. Several months later, a devious shark-hunter called Zac Burgess led some of the locals to believe that he was having an affair with Pippa. This put a strain on the Fletcher's marriage but the truth came out in the end.

In April 1990, Pippa was devastated when Tom died suddenly from a heart attack. He was at the wheel of their car at the time, with Stephen, Bobby and Sophie as passengers (Episode 525). She later had to gently turn down Donald Fisher, who had developed romantic feelings for her in the aftermath of Tom's death. One night, Pippa went to bed and her physical appearance changed overnight for some weird reason. She came down in the morning with a different physique, voice and with burgundy hair. (This was due to the infamous changeover from Vanessa Downing to Debra Lawrance)

In October 1990, Michael Ross moved to Summer Bay and rented a caravan from Pippa in the Caravan Park. After initially being torn between her attraction to Michael and her guilt over moving on from Tom, they became a couple. They married in April 1991 (Episode 757). The Rosses carried on the tradition of fostering wayward teens, taking in Finlay Roberts, Damian Roberts, Shannon Reed, Sam Marshall and Jack Wilson. They briefly fostered the scheming Tracey Turner in 1991 but she asked to leave when she was caught red-handed plotting against Sophie.

Michael's teenage son Haydn lived with them after the wedding but some months later he fell out with his father and returned to the city to live with his mother. In February 1993 (Episode 1176), Pippa and Michael had a baby son called Dale but they were devastated when the little tot died from Sudden Infant Death Syndrome two months later (Episode 1221).

Pippa and Michael's marriage nearly went to the wall in late 1994/early 1995, leading to Michael moving out for a short while. With the help of some marriage counselling, they managed to sort their problems out and got back together again. Sadly, their happiness wasn't to last. In April 1996 (Episode 1912), Michael was drowned while saving Sam who had fallen into a heavily flooded river.

Pippa continued to foster even after Michael's death. Liam Tanner, Justine Wells and Tiegan Brook lived with her. In 1997, Shannon's abusive boyfriend Kye knocked Pippa over and put her into a coma. When she came around, she couldn't remember anybody or anything for a while. One of the things she had to deal with all over again was the grief over Michael's death.

In September 1997, widower Ian Routledge came to stay in the caravan park. He and Pippa fell for each other and he asked her to come with him when he had to leave again. She decided against it but when he returned unexpectedly at the end of the year, she changed her mind. She left to go travelling with Ian in March 1998 but her plans to return never materialised. Instead, she became pregnant and went on to have a daughter with Ian. They decided to settle in the Carrington Ranges and she sold Summer Bay House and the Caravan Park. She and Ian married later in 1999, with Sally travelling to their wedding. She made return visits to Summer Bay in the years after she left but hasn't been back since 2009.

Pippa returned for Sally's aborted wedding to Kieran Fletcher in 2000. She came back again for Alf's Birthday, Sally's wedding to Flynn and to look after the kids in the Beach House while Irene was away.

First Line "We never thought it would be easy." (to Mr Jarvis)

Pippa is 3 weeks younger than her friend Ailsa Stewart who died in 2000.

The late Carol Willesse played Pippa in some scenes filmed for the pilot episode in July 1987. She decided not to commit to the show full-time and quit the role. Vanessa Downing took over as Pippa and some scenes were re-shot. It is not known if the Carol scenes still exist. Jackie Woodburne (aka Susan Kennedy on Neighbours) was also shortlisted for the role of Pippa at the time. In 1990, she and Debra Lawrance competed for the role when it was being recast. Debra won the role and Jackie went on to star on Neighbours for many years. In real life, Debra and Jackie are close friends. In 2018 Debra played her on-screen sister on Neighbours.

On one occasion when both actresses who played Pippa got together, they discussed the fridge in Summer Bay House. It seems it's not plugged in because of the noise it makes on set. As a result, it stinks. Think about that next time you see someone open the door and fetches a drink!

In real life, Debra Lawrance is married to Dennis Coard who played Pippa's second husband Michael. She and Dennis began secretly dating shortly after they began working together on the show. They married for real in 1992, less than a year after their fictional counterparts had tied the knot on-screen. When Debra became pregnant with their first child in that same year, the show writers had to make Pippa pregnant too.

The actors who played all three of Pippa's husbands were born outside of Australia. Roger Oakley (Tom) is from New Zealand, Dennis Coard (Michael) is from Northern Ireland and Patrick Dickson (Ian) is English.

If you look carefully at some of the family photos in Summer Bay house after Debra Lawrance took over the role of Pippa, you might spot her head badly "photoshopped" onto the original Pippa's body.

Pippa was awarded the Order of Australia for services to foster parenting. She is one of the few fictional characters to be awarded such an honour.

Pippa is very nurturing and friendly, taking in wayward foster children from Steven Matheson to Jack Wilson. She can also be quite fiery and strong-willed. She sometimes bottles things up and can be quite stubborn.

She is very talented in the kitchen and in particular loves to bake. She supplied the Bayside Diner with a seemingly endless supply of cakes and meatloaves. She is also a whiz with a sewing machine.

The original Pippa, alongside Tom 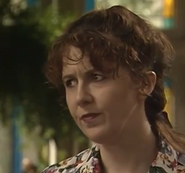 Michael and Pippa test out his snoring pillow

Community content is available under CC-BY-SA unless otherwise noted.
Advertisement