Start a Wiki
The Bayside Diner was the original diner for Summer Bay. The diner was a funky cafeteria style establishment featured in the series from November 1988 to 2000. When H&A first began the diner was not seen or mentioned but opened for business in November that year and was run by Ailsa Stewart. It soon became a popular local attraction for the locals and tourists visiting the sunny Summer Bay. The Bayside Diner usually served fast food, as well as milkshakes, plus the usual cafe fare of coffee, cakes and sweets.The diner even had its own burger shaped phone and an old jukebox, plus many posters of world famous singers and film stars such as Madonna, Elvis Presley and Marilyn Monroe. In 2000, Colleen Smart accidentally burnt it down, leading to Ailsa being upset.

Owners and staff over the yearsEdit

Ah yes, the famous Diner Jukebox which played many chart topping Australian songs over the year., usually as back ground accompaniment, As H&A was very popular in the UK, many of the songs were only known in Australia but Edwyn Collins "Never Met A Girl Like You Before" which hit the UK charts was played regularly. Also Suddenly - Angry Anderson was played in one scene in the Diner in 1989. This song was made famous when it was played at the wedding of Scott and Charlene in that Ramsay Street soap, aka Neighbours in 1987. 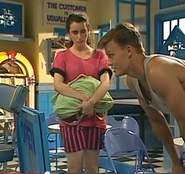 Alison Patterson and Mat Wilson in the Bayside Diner in 1989. 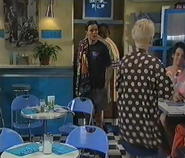 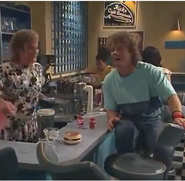 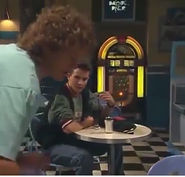 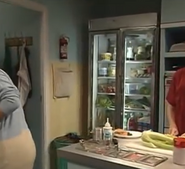 The fridge in the back kitchen.

Adam Cameron and Hayden Ross in the bayside diner in 1991.

Bayside Diner before closing
Add a photo to this gallery
Retrieved from "https://home-and-away-soap-opera.fandom.com/wiki/The_Bayside_Diner_(1988-2000)?oldid=35131"
Community content is available under CC-BY-SA unless otherwise noted.